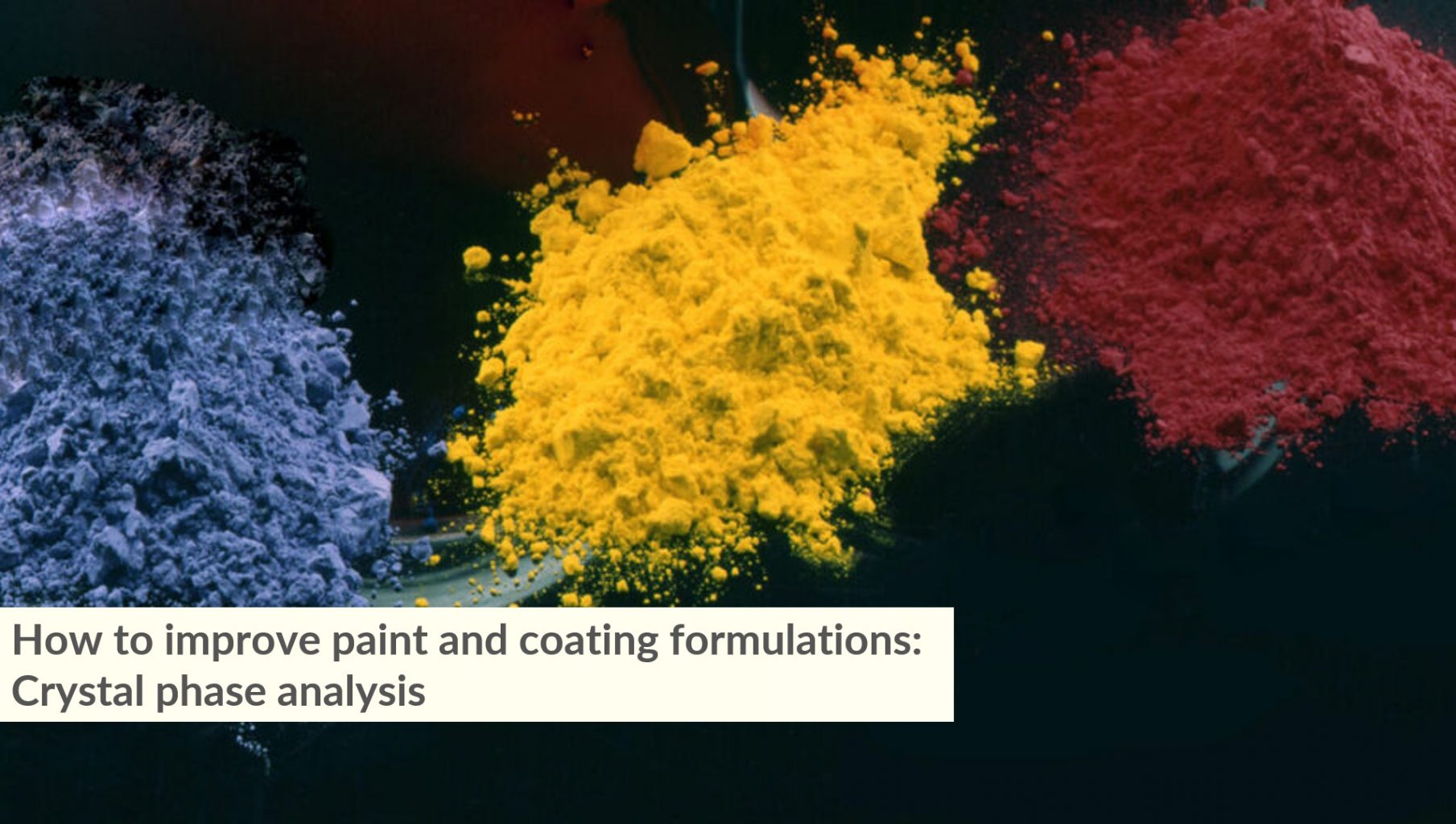 In this series of five blog posts, we’re examining the analytical approaches that you can use to get a better understanding of paints and coatings at a nanostructural level. Number two is an approach that I think no coatings scientist can do without – crystal phase analysis using X-ray diffraction.

Since their discovery by Röntgen in 1895, X-rays have found many uses in physics, chemistry and materials science. In fact, I’ve already covered the use of X-ray fluorescence (XRF) to determine elemental composition in my previous blog post. But despite being based on the same process of hitting a sample with X-rays, XRF’s analytical cousin X-ray diffraction (XRD) works in a rather different way and provides completely different information.

XRD operates on the principle of irradiating a crystalline material with monochromatic X-rays and then measuring the angular intensities of the same wavelength X-rays as they scatter from the material. In contrast to X-ray fluorescence for elemental analysis, (in which the individual elements in a material respond with a characteristic X-ray spectrum), in XRD, X-rays are scattered by the regular arrangement of molecules in crystalline lattices. In large enough crystals, the scattered waves interfere to produce a diffraction pattern.

Diffraction patterns give information about both the molecules in a material and the crystal structure they have in solid form – a combination called a ‘phase’. For larger crystals the diffraction patterns are strong and can tell you lots about the internal structure of the crystals, whereas for smaller crystals (such as nanocrystals) the interference is weak, and instead only a scattering pattern is analyzed. Nevertheless, a scattering pattern can still give you information about the size and shape of nanocrystals and nano-layers.
In days gone by, you’d have had to interpret these scattering and diffraction patterns manually, which required more maths than most people would be comfortable with, but the good news now is that all the analysis is automated.

This means that you queue your sample for automated acquisition and data analysis, and find out a large amount of information about your sample – including the materials present, the distribution of phases, the characteristics of crystallites, thin films and nanoparticles, as well as details of strain, preferred orientation, layer thickness, and much more.

In terms of the amount of information that can be gained using a single technique, that’s pretty impressive. But what is XRD actually useful for in the field of paints and coatings?

What is XRD used for in the paint industry?

You’ll hardly need me to tell you that the performance of paints and coatings depends crucially on the quality of the components that go into the formulation. So it’s little wonder that one of the most widespread uses of XRD in the paints and coatings industry is to check the purity of incoming material.

Top of the list for inspection is titanium dioxide or TiO2, which is used as a pigment in many coatings because of its opacity and white color. However, it comes in two polymorphs, anatase and rutile, with the latter being preferred because of its higher refractive index. Fortunately, determining the ratio of these two is an easy task for XRD, allowing manufacturers to make sure that their supplies don’t deviate from what’s needed (the use of XRD for this task is even the subject of a standard method, ASTM D3720).

In addition to simply checking supplies, XRD has a role to play in more advanced formulation science, by looking more closely at the color performance of a particular component.

For example, the various phases of iron oxide used in formulations provide gradations of color that are important for achieving the right balance of tinting strength and hue. Built upon many years or artistic endeavor, there are plenty of other pigments where understanding the exact nature and purity of an inorganic or organic compound – or mixtures of them – is critical to achieving a reproducible and enduring color specification.

There is also a large new world of extenders, which can be mineral or organic particles that are more cost-effective than the main color pigments and which can contribute positively to the final color performance. But their mineral purity is important, and phase analysis is frequently used to identify and screen any mineral inconsistencies.

(By the way, color will be a big focus of the next blog post in this series, when we’ll be talking about the effect of particle size and shape).

Last but certainly not least in this short review of the applications of XRD are so-called ‘smart’ coatings. These are coatings that respond in some way to an external influence – such as varying their refractive index in response to temperature or electric field. In many of them the ‘smart’ function is contained within crystalline pigment particles, which require the same analytical considerations as mentioned above for ‘color’ pigments.

But whatever exciting properties they may have, smart coatings are still fundamentally coatings, and so can be investigated using the same techniques. Once again, XRD is of particular value, because it is unsurpassed in its ability to provide nano-scale information on surfaces and polycrystalline thin films. For example, XRD experiments dedicated to surface thin films can tell you about residual stresses, preferred orientation, film thickness and other aspects of surface microstructure – all of which are essential in order to know how your final coating is performing and whether it’s going to remain ‘smart’.

All the above examples show the growing importance of XRD in the world of paint formulation and application. This is especially true given the growing pressure on quality of supplies, and as the accelerating need for higher-performing coatings piles pressure on manufacturers to understand what’s happening in coatings at the nanoscale.

In conclusion, as someone who’s spent much of my career using XRD, it might come as no surprise to hear me say this – but if you allowed me just one analytical technique to use in the paints and coatings sector, it would have to be XRD! 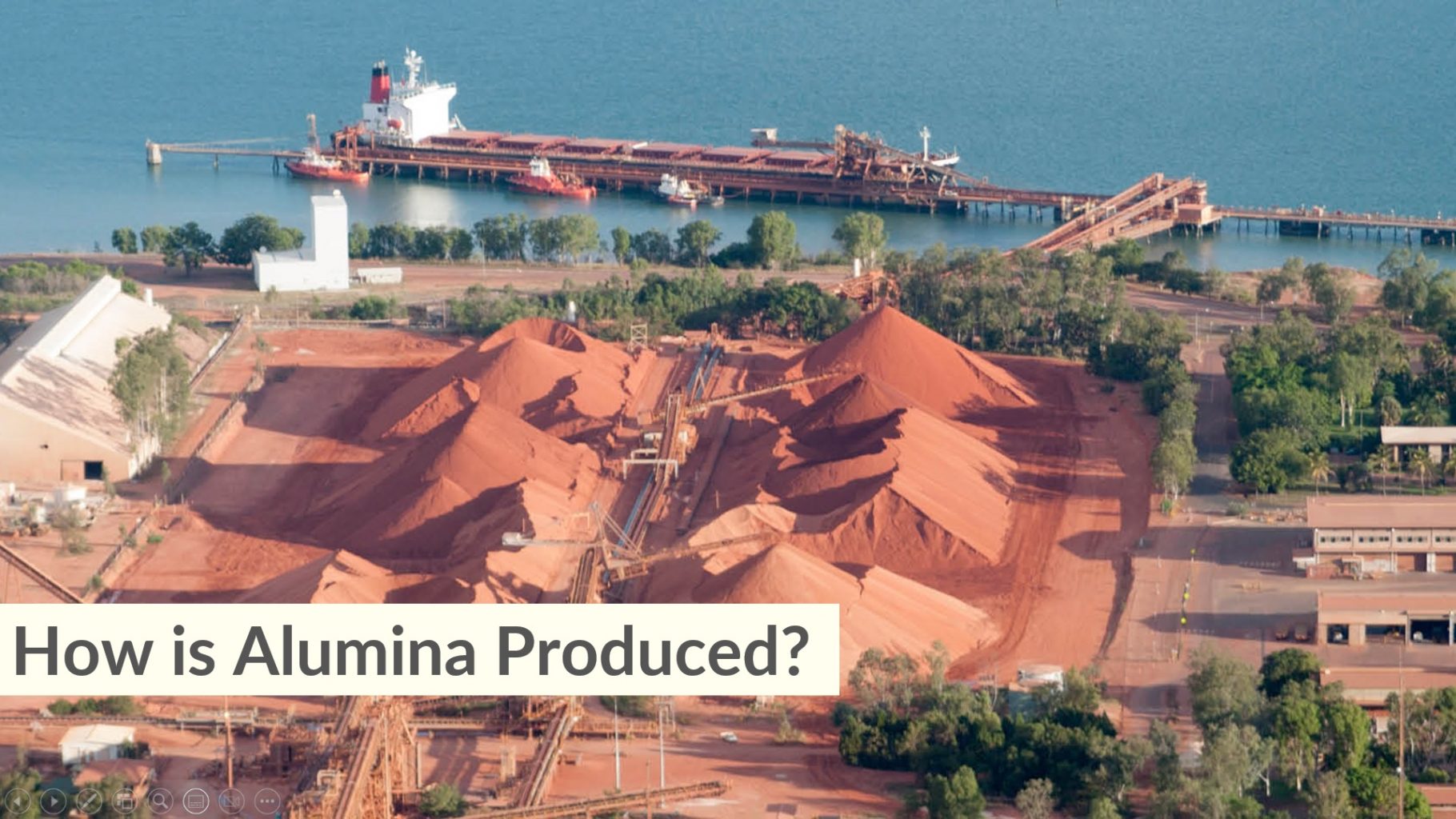 Alumina is the common name for the chemical compound aluminum oxide (Al2O3). Naturally occurring Al2O3 is called corundum, and it is the foundational component of both rubies and sapphires (color variations arise from the impurities that are found in the crystals). Alumina for industrial use is refined from bauxite ore, which is a mixture of the hydrated aluminum oxide minerals; gibbsite, diaspore, and boehmite along with other compounds such as silicon dioxide, iron oxides, and titanium oxide. Bauxite is often mined from topsoil in tropical and sub-tropical regions. The Bauxite is then treated using the Bayer Process, which separates the bauxite into red mud and Al2O3 using a combination of heat/pressure and sodium hydroxide. Aluminum hydroxide, in the form of fine-grained crystals, is added to facilitate precipitation of aluminum hydroxide crystals. The hydroxide mixture is then heated to drive off the water, producing several grades of alumina; calcined alumina, smelter grade alumina and activated alumina.

The purified aluminum oxide has many uses, with perhaps the best-known being the end-use in foundries which turn it into aluminum metal, which in–turn is used in a variety of applications. The powdered alumina is also used in several industries, including as fillers in plastic, an abrasive in grinding applications, ceramics, and even to produce reflective effects in metallic paints for automobiles! One of the largest industrial applications for Al2O3 is as a catalyst in refineries, to convert hydrogen sulfide waste gases into elemental sulfur.

As a reference material producer, LGC understands how critical quality-checks are within each stage of the production process. Screening is needed from the raw bauxite coming out of the ground, to the red mud by-products, as well as purity screening of the refined alumina. Once the alumina is turned into solid aluminum metal and Al alloys (to be discussed in a future blog), even more checkpoints are added to the process. LGC Industrial currently provides numerous 17034 aluminum metal standards typically used with either spark OES or XRF, and we will soon be releasing our own line of powdered bauxite and alumina standards.

View our range of aluminum alloy and other metal reference materials by downloading our catalog.  Download Metals Catalog 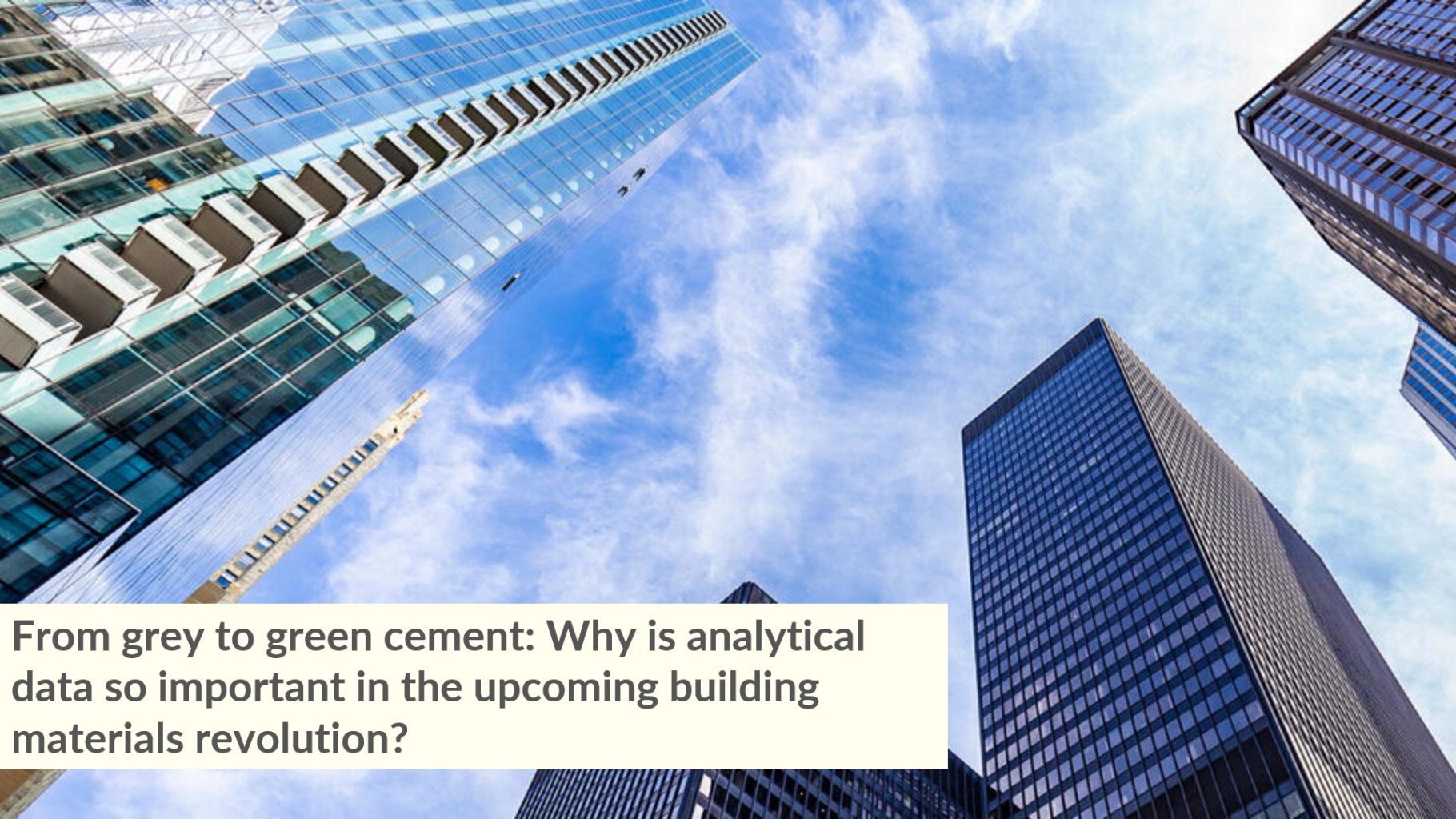 It’s predicted that 2 billion people will move into cities over the next 30 years. That’s a lot of people – and all those people will need a lot of new infrastructure to be built for them! Much of this growth is likely to rely on cement and concrete, and so the challenge is to build a truly sustainable future for our cement and concrete industry.

On average, 850 kg of CO2 is currently produced per ton of clinker during cement production. This makes the industry responsible for around 7-8% of total CO2 emissions worldwide, and means that sustainability – moving to ‘green cement’ – is an urgent priority.

This challenge will have many different solutions, including saving natural resources and considering efficiencies at all stages of the value chain. We need to create a whole new cement ecosystem involving all stakeholders, from manufacturers to construction companies.

From clinker and cement production through to construction and building design, innovation is finding new ways of working. Transformation doesn’t happen overnight – but by working to make each individual stage better, we’ll be able to step back and see the huge achievements we’ve made together.

So, how can you get involved with all this innovation?

In the short- to medium-term, the first step is to work with the conventional methods we have – and that means addressing clinker. Better production efficiency, digitalization, and alternative fuels or renewable materials can greatly reduce the CO2 released during clinker production.

Materials analysis leads naturally to more efficient processes further down the line – for example, your kiln works more efficiently, and you need less correction of your feed composition. X-ray diffraction, such as with the Aeris Cement, lets you monitor mineral phases and control additions to clinker. Particle size distribution analysis, using a laser diffraction instrument like the Mastersizer 3000, can ensure proper raw grinding.

Cement of the future : Green Cement

The second step is to explore green cement products, such as novel or blended cements, and low-carbon concretes. Clinker substitutes such as calcined clay, pozzolans, fly ash and slag produce blended cement with a lower carbon footprint. Exciting new processes allow concrete to sequester carbon from other industries – potentially mitigating 2 billion metric tons of CO2 emissions (that’s a ton for each of those future people moving to the city!). Geopolymer cements also offer another alternative path towards sustainability by using industrial byproducts and less processed materials.

The cement production process is complex, and every variable can affect the cement’s final performance and strength. Innovation needs to be done carefully to avoid higher costs and waste. The key to success? Precise monitoring and analytic data – not only to control these complex processes and ensure high quality, but also to comply with industry standards and regulations.

Monitoring brings great benefits, too. Being able to control elemental composition and particle size more precisely than ever before allows you to use alternative materials or fuels. In the short term this can help to cut costs and mitigate supply chain instability – and in the long term, can enable efficient, green cement processes across your entire production flow.

Malvern Panalytical offers complete process control solutions that meet the evolving needs of the modern green cement industry. Our comprehensive solution packages are now the standard for most process industries, including more than 400 cement plants worldwide. From fully automated laboratories to instruments for manual sampling or on-line analytical monitoring, our solutions can be implemented at every stage of production to improve efficiency, cut costs, and power innovation.